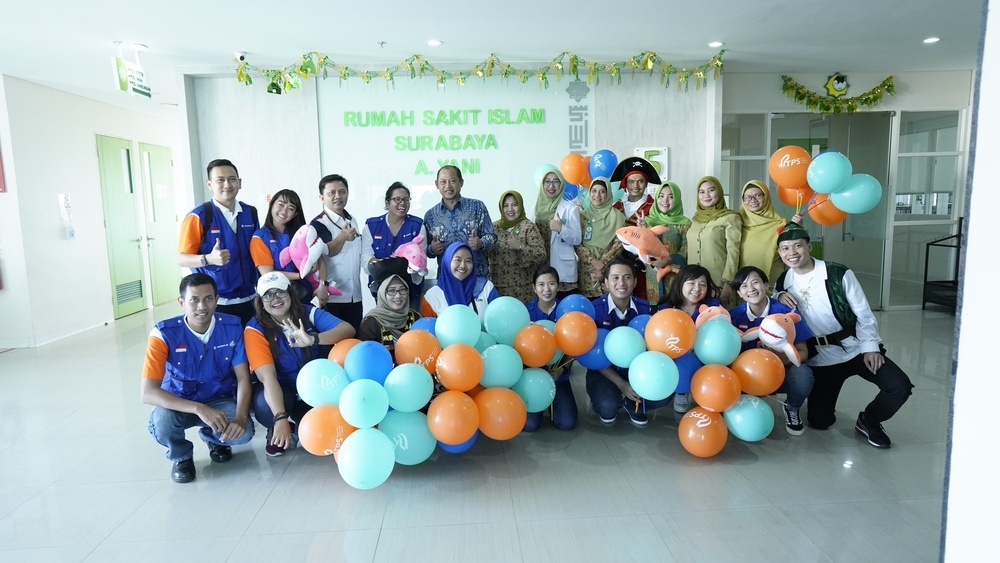 Most children will celebrate it with various physical activities such as playing together or participating in various competitions. Different conditions for sick children, who need special care at the hospital. A happy heart, enthusiasm to recover soon, is one of the drivers of the recovery of patient health, including children patients.

In the midst of the tight schedule of care and recovery of their health, TPS was present to provide support and joy. Together with hospital staff, children are invited to maintain personal hygiene. At the end of the visit, a baby shark doll, a TPS balloon and a goodie bag filled with healthy snacks were given.

TPS volunteers, who wore some marine character costumes such as Popeye, Peter Pan and pirates, managed to enliven the atmosphere and happy smiles on the faces of the children who were being treated at the hospital and at the visited foundation. Their laughter broke out, when the volunteers started greeting, not infrequently those who scrambled to take pictures with the characters, some were shy and sat on his mother's lap.

Erika A. Palupi, Legal & Commercial Manager TPS said that this event was a form of support from TPS Management on the commemoration of this year's National Children's Day, especially children who were receiving medical care, so that they could recover as soon as possible. “At least with our presence in the midst of them can give happiness and enthusiasm to get well soon” said Erika.

In addition to providing motivation, attention and love are the main things, because a happy heart is a strength in itself, especially for physical conditions are not healthy.

PT. Surabaya Container Terminal or abbreviated as TPS is a subsidiary of Pelindo III Group, which is engaged in port services in the export-import and domestic container terminal services. TPS was established in 1992 as a Container Terminal Unit (UTPK) and was privatized on April 29, 1999 by P & O Dover with an ownership interest of 49%. In 2004 polling stations have reached throughput of> 1 million TEUs and continue to grow until now. On March 1, 2006 the P&O Port Holding Company was acquired by DP World, so that all assets and investments of P&O Dover transferred ownership to DP World, including a 49% stake in TPS so that the composition of TPS shares was 51% owned by PT Pelindo III and 49% owned by DP World. Since April 28, 2019, Pelindo III has purchased all DP World shares in the TPS, so that since then, TPS shares have been owned by and TPS operates under the leadership of Pelindo III.

TPS operates its core business as a container terminal operator, as an economic gateway for export-import activities in Eastern Indonesia and is the first terminal in Indonesia to implement ship safety standards and port facilities which came into force in July 2004.

CARING AND LOVE FOR CHILDREN of INDONESIA CHAMPIONS
Share