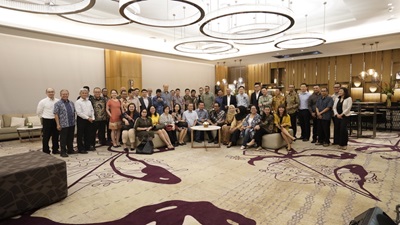 In line with Customer Focus, one of Pelindo III's corporate cultural values as the holding company of Surabaya Container Terminal (TPS), TPS held a meeting with shipping company executives who are TPS Service Users at The Westin Hotel Jakarta.

The CEO Meeting 2019 was held for 2 days, Thursday and Friday (11/7 - 12/7). Divided into 2 agendas, One on One Meeting was held to deliver TPS strategic programs to strengthen services and explore opportunities and business cooperation in the future. As the highlight of the agenda, executive dinner was held. A warm casual feel adds to the atmosphere of intimacy between TPS management and its customers.

The agenda was deliberately held in Jakarta, in addition to providing a different atmosphere because usually meetings are held in Surabaya where polling stations operate, also in order to feel the enthusiasm of the business pulse in the capital city.

The CEO Meeting is also a good opportunity to present and introduce the TPS Board of Directors (BoD), since April 28, 2019, the TPS has been under the leadership of Pelindo III. In the event the long-term and short-term plans and strategic programs that will be carried out by TPS will continue to provide the best service.

TPS President Director, Endot Endrardono also said that increasing productivity in the stacking field is done by operating additional equipment in the stacking field. "4 RTGs are ready to be operated in stages, starting in October 2019, 2 Reach Stackers and 10 ITVs arrive in stages and are operational from June 2019," Endot said.

In support of the TPS's long-term program, investments to be made from 2019 to 2021 amounted to USD 134 million, including investments in the following procurement:

TPS can be in its current position with the support and trust of loyal customers. Suggestions, input and customer complaints are the motivation of TPS to always try to improve and provide services beyond Customer’s expectation.

PT. Surabaya Container Terminal or abbreviated as TPS is a subsidiary of Pelindo III Group, which is engaged in port services in the export-import and domestic container terminal services. TPS was established in 1992 as a Container Terminal Unit (UTPK) and was privatized on April 29, 1999 by P & O Dover with an ownership interest of 49%. In 2004 polling stations have reached throughput of> 1 million TEUs and continue to grow until now. On March 1, 2006 the P&O Port Holding Company was acquired by DP World, so that all assets and investments of P&O Dover transferred ownership to DP World, including a 49% stake in TPS so that the composition of TPS shares was 51% owned by PT Pelindo III and 49% owned by DP World. Since April 28, 2019, Pelindo III has purchased all DP World shares in the TPS, so that since then, TPS shares have been owned by and TPS operates under the leadership of Pelindo III.

TPS operates its core business as a container terminal operator, as an economic gateway for export-import activities in Eastern Indonesia and is the first terminal in Indonesia to implement ship safety standards and port facilities which came into force in July 2004.